It is not so hard to see how much an impact economy or in other words “money” has on our life. Everyday trillions of transactions are made across the world. It runs so deep in our language that the first thing that the word “poor” tells us is that someone does not have money. For rest of the usages we almost always have to use some qualifier to specify what are we trying to say. This is not a special case, we do this is almost to every word or thing, animal or people. It simply makes life little easier for us having some simplicity around us. So what does this poor means? Do we have any global standard? In my awareness there is no such accepted standard. Purely based on money earned per day as well does not help as it has different value in different countries and cities. Once we start to include access to facilities like medicine, water, sewage, shelters etc. , it becomes even more complicated. It is interesting however to observe different forms of “poor” as we move from countries to cities to cultures and perspectives. Thanks to one person, let’s say Johny, I recently met, I was shaken to write this article which I thought to write a couple of years ago.

Let me take really simple case first, the economic one. I met people who would, in a serious tone, talk about how people in their country or community are poor and have low incomes. This in turn inhibits their chances to live a better life. In most cases it would be blamed on capitalism and politicians. Johny made this really simple. Looking from his perspective, there are poor in countries like India, Bangladesh and others and poor in Europe. In that sense situation is basically the same. There are people in west too that live on streets and do not have an apartment. This fact is enough to conclude that living situation for the people is same at both places. While mentioning about income of some job roles e.g. school teachers, a waiter, bar tender etc. for example; they have low income in general across. This concludes that they are equally “poor” around the world. These people in the given roles in west would probably agree with Johny at least as far their situation is concerned. When I have seen these people, a lot of them can live in an apartment, can have all the meals even in restaurants, go to school, take short holidays, have medical care, water in house, electricity, Internet, buy bikes, cars, can sit in bars, drink beer and smoke. They are probably not rich enough to have holidays in Norway or other similar countries. But are they poor? Is it fault of capitalism that they cannot manage their finance and end up being in loans? This in a very simple way is new definition of “relative poor” for those people who probably put all of these as “human rights”. Some people are trying to promote such amenities as universal basic income. I would about this in a separate article. However, this type of mindset, this understanding of economy highlights a different type of poorness that human development has brought and may explain some of it. 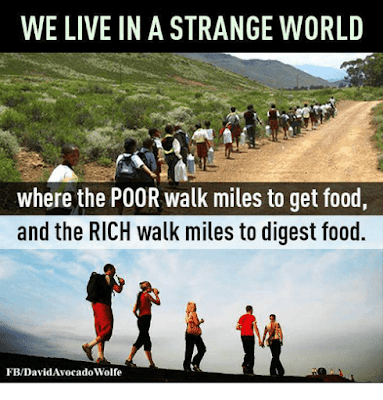 Once a time, rich were those who could afford daily meal. This changed with agriculture and animal farming, but still did not solve all issues. Droughts or rains or animal disease could make situation really tight and people would fight over it. Today there are people, who have all the access to food. Not just the food available and produced in their countries, but imported from across the world. But, still a lot many people either cannot eat because of sickness, allergies, they are in diet program, contains too much fat or carbohydrate, too busy drinking wine or beer, too busy working or just do not have the appetite. Are these people rich or poor?

It was a special moment when mankind started to make clothes and they found colors and designs to adore themselves. It is so strong that at some places not to have clothes on body or have rags is the sign of being poor. It can be seen in the below experiment very easily. This is not the only such experiment. However, on the other side the riches now go to specialized stores to buy “rag look”. Apparently these rags cost more than normal cloth. What have we lost here? What kind of poorness is this?

It took long time to develop language scripts across the world. It was not till recently that reading became a norm. Reading or writing was left for specialist, especially the bookkeeper who can ensure that taxes are calculated properly. As the time changed, people realized the power of reading and writing. People would read on the floor, on streets in candle light in cold or hot. Now we have all the facilities including conditioned apartments, room lights, tables and desks, but somehow it can still be inappropriate environment for reading or writing. Of course these people are not poor in money, but what have they lost?

Humans stayed outside for their work most of the day time. Worked with hands and bodies in the fields or cut woods or chase animals. The work, the sun, the animals, the experience made them strong and healthy. We moved on to new type of works to earn more money and comfort. We got all of that, but what did we lose? We lost health not just physically. We build sports halls, dance halls, gyms for that. But we still like to take a bike or car to reach the gym or it is just too much work to go there. What kind of poor are these?

These are just few examples. Around the world people are talking about Sun and its energy not for just for electricity, but also for its health benefits. People talk about nature and save the nature, plant trees. But the moment we go out to enjoy sun, we put our sunglasses first as natural way of facing sun. We love the sun so much that we even put curtains in our rooms so that we can watch TV. We see a plant becoming a tree on the road or next to a building, we would like to pull it out. People would come back from the farm or hunting or collecting water once the sun sets down and get together. They could share the song they thought, the music someone played, share laughter or a joke. Mankind travelled far to meet people not just for business but to share their stories. Now, we need few drinks before we can sing a song or laugh wild beyond what is socially accepted. We have friends around, but we need mobile phones to start a conversation. We prefer to send messages than to talk face to face. We go far and miss places and people rather than being there and with them.

What kind of poverty are these? One way is available on this source. Maybe some expert can put these in many different categories. However, one that I really miss around is the capability of sharing simple smiles and laughter.

Mulla Nasrudin was telling a friend his future through palmistry. He said, “You will be poor and unhappy and miserable until you are sixty.” “Then what?” asked the man hopefully. “BY THAT TIME,” said Nasrudin, “YOU WILL BE USED TO IT.”

The need of extraterrestrial existence