West and east in the economic world are used as synonymous to rich and poor. Almost the same way it became synonymous to developed and developing. Of course there are exceptions on individual, country and reference level. E.g. African, South American and east European countries are west of China and India, while Australia and Japan on the east. However, generalized articles, books and conversations would tend to align with my opening sentence. This especially was dominated by few countries; with US, UK and Germany being considered as west, while China, India, Japan and others on the east just a few decades ago as the symbols of West and East. This of course helps to generalize mindset of people and the feeling of being better than the others. No wonder, it took more and more people from west to east to “help” and make documentaries about the state of eastern countries. However, while the help, equality and being generous remained the leading words in public communication, it usually never is the reality.

I met a person, who lived mostly in west and would like to help people in the east. He likes to buy special things, make tours around the world. In those tours he would prefer to work with eastern world as they would be ready to work for less. This helped build a mindset that when he comes back or even goes to another country, in his dealings he would keep using the reference, “oh but in east, I can get it done cheaper” Or ” you know in east people would push each other to work on this job for the fraction of this money”. For some reason, either being completely ignorant or considering himself a smart thinker, he would avoid stating that he is no longer dealing in the eastern countries, where eastern countrymen need to live in their cities and pay for their living in their own eastern country lifestyles. On the contrary he felt bad and cheated, when in an eastern country someone charged higher price for a product/service to him being a westerner than the seller would have charged to a local person. He was totally enraged while telling the story to everyone around about this greedy eastern seller. I find it strange, as to why is it ok to come to east and buy at a cheap price, rather than eastern charging a higher price to westerner, who can actually afford it and would still pay less than his own country. Which one is more unethical?

Once I was in Bali on a short travel. On my usual walks around the town, I happened to have lunch at small local food vendor. Being a small place, it is easier to start conversation with the person on the next table. I learned that the person is from west and has setup a business of jewelry and accessories in Bali. Of course the business model is to make it in Bali and then export and sell in the west for atleast 5 times the cost including all expenses. When I was there, it happened to be the days around Nyepi. It is a day of silence, introspection and meditation. Do read about it. I did not know about that, it just happened to be a nice coincidence. A wonderful idea and experience. This also meant holidays for Balinese people. While all of Bali was decorated and in the full festive mood, this westerner was totally mad. She said, they are so lazy, just need any reason to get holidays. In her opinion there are just too many holidays created for nothing and that impacts her business. Now, why is it OK to go to an eastern country, setup your business, getting profits for yourself, but it is so wrong to be part of their culture, to celebrate their festivals. If this bothers you, why not just go back to your own country as people there would be more aligned to your notion of holidays and work ethics, isn’t it?

What does this kind of mindset represents? One of my friend once introduced me to the idea of white privilege. I did not know there is an official term for it. However, from my own experiences I knew it exists. Of course a lot of people do not even know that they are privileged. It is hard to accept something as a privilege when you grew up with the idea of those things as so normal as there is air to breathe. I think it is the same mindset that makes people think that things should be as they want it to be, independent of the fact where they stand on earth. In some way it relates to the idea that if west outsourced its labor to east, it is ok. If west sends it people to “help” east, it is ok. If west bargains in east, it is ok. If west go in rags, stays on streets, try to find cheapest places to stay in east, popularly know as begpacking, it is ok. But if east comes to west to work at the wages lower than locals, for the jobs that locals do not want to do, it is not ok. If east comes to west to make an opportunity for itself, it should still be treated as it is still in east. If east comes to west and stays in hotels and go on tourist packages hiring guides, they are looked upon as suffocating cheap travelers.

People themselves are responsible for their acts, but for some reason it is only Trump who gets the blame. Is he not the representative of the inner desires of people? World blames Trump for his anti-immigrants stands, but they would like to push anyone back, when it happens in their own backyard. People wants the government to provide all facilities, but do not want to pay taxes. The same people from outside would blame the minister, but the moment one of them becomes minister, they forget anything that they ever said before. But still, it is just Trump who is getting tagged as crazy. Should he not be praised as he is the one out there taking blame for thousands and millions of people, who sit silently in their home brewing the same mindset and negotiating a better deal for themselves.

The world is changing all the time. At one time there was no United states, no British empire and not even Roman empire. As the empires shifted the mindset shifted. The difference is that earlier there used to be enough time for people to get aligned to the changing realities. Changes would happen over centuries or thousands of years. No one could take a plane from one side of the world to the other in a day. Neither could “the green planet” people could arrange a video conference. Somewhere in those changes, west became superior than the rest and every individual started to believe that they know what is the right way and what others should do. I simply hope with all the fast changes, somehow people can still find time to smile. A smile that is authentic and not that smile they teach in “beauty pageant” training.

Nasrudin the smuggler was leading a donkey that had bundles of straw on its back. An experienced border inspector spotted Nasrudin coming to his border.

“Halt,” the inspector said. “What is your business here?”

“I am an honest smuggler!” replied Nasrudin.

“Oh, really?” said the inspector. “Well, let me search those straw bundles. If I find something in them, you are required to pay a border fee!”

“Do as you wish,” Nasrudin replied, “but you will not find anything in those bundles.”

The inspector intensively searched and took apart the bundles, but could not find a single thing in them. He turned to Nasrudin and said, “I suppose you have managed to get one by me today. You may pass the border.”

Nasrudin crossed the border with his donkey while the annoyed inspector looked on. And then the very next day, Nasrudin once again came to the border with a straw-carrying donkey. The inspector saw Nasrudin coming and thought, “I’ll get him for sure this time.”

He checked the bundles of straw again, and then searched through the Nasrudin’s clothing, and even went through the donkey’s harness. But once again he came up empty handed and had to let Nasrudin pass.

This same pattern continued every day for several years, and every day Nasrudin wore more and more extravagant clothing and jewelry that indicated he was getting wealthier. Eventually, the inspector retired from his longtime job, but even in retirement he still wondered about the man with the straw-carrying donkey.

“I should have checked that donkey’s mouth more extensively,” he thought to himself. “Or maybe he hid something in the donkey’s rectum.”

Then one day he spotted Nasrudin’s face in a crowd. “Hey,” the inspector said, “I know you! You are that man who came to my border everyday for all those years with a donkey carrying straw. Please, sir, I must talk to you.”

Nasrudin came towards him and the inspector continued talking. “My friend, I always wondered what you were smuggling past my border everyday. Just between you and me, you must tell me. I must know. What in the world were you smuggling for all those years? I must know!”

An infographic shows how people perceive globalisation. Interesting point about US, very much aligned to my comments above. 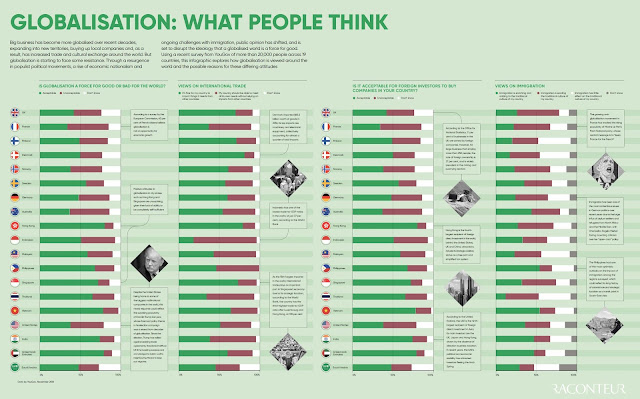