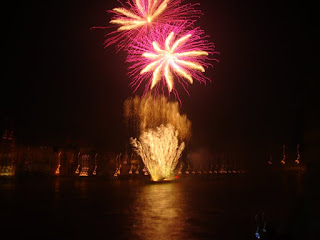 The phrase really feels true today, when I am writing this blog. Which phrase? The phrase is, ” Days are longer and Years are shorter”. Today while writing this one, it does not feel it was 365 days ago, when I wrote my first blog of 2009. It was a good start of the year and really what a year it was. I did kept the momentum going and I wrote quite a lot on various topics. Surely, I never though to complete a book in a year. But, at least I got into the phase where I am able to pen down my thought (Well not exactly “Pen down” 🙂 ).

Revisiting year 2009, it occurs that so much has happened in a year. I moved to Basel, visited Paris and UK, my parents travelled for the first time outside India to UK, made some new friends, picked up some new things and some new friends, went through some bad phases, some bad experiences. Overall it was a very exciting year and I really feel 1 year more older :).

As this beautiful year comes to an end it does need some ceremony to say good bye. I w 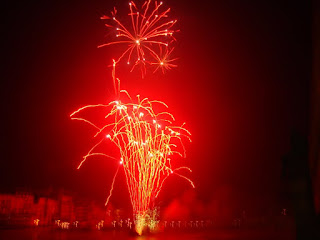 ent to Rhine river to watch the fireworks organized by the City administration. There was free wine available as well, but no use to me :(. I tried to get some company on this celebration , but at the end I was walking alone on the streets to Rhine. I left home at about 2320 hrs. Thinking that I may get late on my natural slow walk, I decided to speed up. I really did some good job in walking as I was at Rhine at 2330 hrs!!. I did not find many people on the streets or even at Rhine at that moment. I did observed some people gathered in some pubs, restaurants or some organised a party at their place too. Walking briskly, observing the streets, places I did not noticed I have reached Rhine bank. Now I had to simply take left and keep walking alongside Rhine to reach the central bridge, where the wine was being distributed. Timing to reach Rhine was very precise. I walked in parallel to the ship, which I came to know later carried all the fireworks of the night. Finally after another 10 minutes I was at the bridge.

Bridge was full of people and was gathering more people every passing minute. I walked across the bridge to other side of the river and back. After a good leisure walk, I settled at the steps joining the bridge to the riverside path. It was a nice spot. I was able to see the ship, which sailed along with me to the bridge. It was 00:00 hrs, some small crackers started. People were drinking, getting lively. Everyone was cheering, laughing, smiling, kissing, snuggling in the winter. It was quite a warm environment. Some African group was playing music just near the bank as well. They almost always plays a lovely music. As the time reached 00:30 even the steps got crowded, which I thought would be spared. Here, I was wondering If I should change my place to get a better spot and it hit the time for blast. It was 00:30.

The one thing I like the most about Basel is the accurate timing. The trams, trains or other events starts precisely at the time given. Same was with the fireworks too. As soon as it hit 00:30, the shots starting coming from the ship. The sky was filled with multi-color lights and many beautiful patterns. All this lighting was fully supported by the sound of the crackers. It was not the sound and lights of the crackers, but also the shouts from the crowd keeping the party alive. every shot was accompanied by many echoes from the public. One of the scenes, which I could capture from my camera is below.

After watching 20 minutes of fireworks, wishing few of my friends A Very Happy New Year, I came back home at about 01:30 and went to sleep.
It was really a good farewell to beautiful 2009 and a very warm welcome to 2010.
A Very Happy New Year to everyone.
Love
Arundeep

How much land do you need?