Skip to content
I was lucky again. How? I am in Switzerland for work. Luckily at the same time my brother is in London, UK. This made it easy to get visa for UK and also the 8 days stay in UK came free of cost :D. And I cannot say enough about the delicious food of my sister-in-law. The time I spent with my almost 2 years niece. She is amazing kid, just that she is friendly only with her parents. It took some time for her to get ready to play with me. It took 2 days for transformation from uncle to “chachoo”. I was too happy to hear that word in her sweet voice. Not just the first time, every time. I could not cover many places in London, but I do not regret that. I was too happy to spent with my brother and family. Amazing time.

I used to take a train from Greenmayes station to reach one or the other part of Central London. I went to few museums, Oxford circus, Harrod’s, Burmingham palace, London eye, Trafalgar square and finally to Madame Tussauds. It was only of 4th day or was it the last day when I noticed that there was cemetery on the way between Greenmayes and Liverpool. It was the biggest I have ever seen. Suddenly I was thinking how much land would have been used by Cemeteries. This land could have been used for houses, building or any other constructive thing. It may have also helped to reduce the land shortage in many cities. Then I tried to put some figures to area of land captured by a human alive and dead. May be 30-40 square meter vs 1 square meter?? Then I realized that today land is not just measure horizontally. It has a vertical measure too, atleast while alive. Then my thought move to a childhood story.

In the story, a person is given the freedom that he would be given as much land as muc 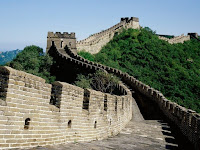 h he can cover by foot till evening. The person starts running to cover as much land as possible. He kept on running through the blazing heat. He does not even stop for water or food, thinking he will loose some land. When he reached far enough for his greediness, he realized that he may not be able to reach back before sunset. But he could not loose the opportunity. Tired of running, dehydrated with lack of water, he collects all his energy and starts running back at full speed. As the distance which was to much to cover he falls short of breath before he could reach back. The sun sets and with it his life also says good bye. At the end, he was buried in just 2 yards space!!!! Isn’t all that is required!!!

You may to either want to laugh on my thought, calculation or the poor man who ran so many miles to get nothing. Whatever may be the reason, but do laugh and laugh with open heart.