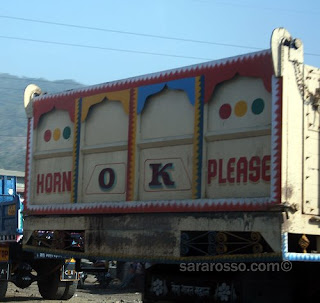 Another weekend at home was over. It was Monday and I had to come to office again. I woke up early at 6:30 AM (Can you believe it!!!!), got dressed, had breakfast, cleaned the car and started for my 80 km journey to Chandigarh. After about 15 minutes of drive, I had to stop at crossing. There have been advancement in cities and many lights now have counters attached. It makes it easy to decide, whether to switch off the engine or not. I have heard that it is better to switch off the engine, if the counter is more than 3 seconds.
When, I reached the crossing it was about 60 seconds wait as per the counter. I was the first one in the line. I switched off the engine. I was listening to some song on radio, while keeping an eye on the counter. It started counting 10,9,8,7,6,5 and 4. That was it. As soon as it hit 4, everybody behind me started honking at full blow. I could not and never have understood the meaning of this honking. What do people expect me to do in those 4 seconds. There are still 4 seconds left. I will surely move when it becomes Green. What do they think, that I cannot see the light, or I do not understand the meaning of the Green signal. I do not know whether I will ever know the secret behind this honking or not. I could not do anything. Kept on listening to the full volume “Rock Music” for 4 seconds. Finally it turned Green and I cleared the crossing. It did pacify them and they stopped their music. I was relaxed. That’s another story that I had to listen to the same music station whenever I stopped at crossing!!!
I moved ahead. I was trying to be in my lane. (Anyone not from India may be surprised to know that it is a “legal crime” to drive in lane in India). The vehicle in front of me was moving like snake. I tried to over take it. But it was crazy. I could not know, when he will turn right or left, without an indicator or warning. Its just that he feels like turning the wheel and there it goes. Then, I read the text written at its back “Keep Distance”!!!!!. It was true indeed. I had to finally manage a good distance from it 🙂
Keep distance !!! In India???? What a Joke!!!!!!! It is probably yet another hard to do thing on an Indian road. Yes, yes, no one may believe me. But its true, atleast in India. I had been trying to do this, since I have learned driving. It is still a far cry. Lets see how it goes. Generally people in India drive bumper to bumper (There are even Radio programs on the same name). I do not know what they get out of it. Some safety or feeling of good driver, or they try to peep in the front car for some good looking girl!!!! I have no clue. I generally try to keep a minimum of 1 car’s distance in between. But, soon that distance would be lost. Why?. Because the person behind will see this gap as an opportunity, probably feels I am an idiot (Wasting valuable space!!). He sharply moves to left without an indicator, accelerate and then immediately make a right to capture that space. What skillful demonstration of driving. He surely would be feeling like Queen of England. And I left with no choice again to slow down, make a car’s distance for another car to capture it.
The only way I have is, to drive fast. But in the previous paragraph, didn’t I mention about “keep distance ” and snake driving. Hmmmmmm, all it means is nothing. Just drive in a way to reach destination alive in one piece!!!!!
Drive safe and keep smiling. And Remember that from now ,”Horn is OK!!!!!”
Arundeep Singh

Is it true that people in west do not like to work!!!!!