Recycle, re-use, waste management, waste segregation, Great pacific dump, plastic disaster and so on. These words or at time slogans are not too difficult to find around us. Few year back, one would need a big campaign with posters around the city or have door-to-door visits to pass the message to people. Then TV took the prime seat of communication to people as more and more people would focus their eyes every day to this shiny gadget with fast moving pictures. However, the way small screen of TV took over the Big cinema screen, yet another small screen took the limelight away from TV i.e. mobile phones or to be specific smartphones. In some way the need is same; to get attention of the people. Thanks to the widespread use of smartphone, it became easier to send messages to everybody. One of the other way a person gets a message. It does not matter, if you are facebook person or prefer WhatsApp or like handles of twitter. You might have seen some advert about the importance of re-cycling or the consequences. Consequences could be a photo from Great pacific disaster or some strangled fishes or other animals or even some deforested lands.

Ofcourse it is part of the process that we create something and later we have to deal with its side effects. Whether the side effects were known or unknown is another debate and let’s not get into that. It does not matter which topic we would be talking about, one thing remains common that everybody finds their own understanding of the situation. Each person would like to believe that they understand the problem and their solutions is the right one and how others need to change. It could be about driving by cars vs bicycles or pharmaceutical medicines vs cannabis. Every statement, every perspective have its followers. Re-cycling is nothing different. I had two experiences that made me sit down today to spend some time on the computer to write about it.

One lady I met was a special one. She had her own world running with unbelievable amount of energy. She could do lot of things in a day, which others would not put in thoughts also together. I learned few things from her as experience and others just with observations. One thing, I did notice that she was very detailed about recycling things and thus segregation. Glass, metal, paper, waste food, plastic, different variety of plastics and so on. She would so far to remove every paper stuck on a glass bottle or any label from metal can. If the container was made from different materials then she would make sure, all materials are somehow taken apart and put into its categories. It did not matter if the 2nd material is just about 1% of the main container. E.g. a metal ring left on top of a glass bottle. To achieve this level of detailed segregation is not easy. It takes lot of time, effort and sometimes other materials as well, e.g. water to remove glued material from glass bottles. I asked her about it one day. She told me that she has even talked to the city authorities to show her and other people the recycling facilities and the process. She claimed that city recycling team is not doing the job properly and she would like to educate people also on how to segregate the products properly. This should help to avoid wastage at the end.

On the other hand, I would see situation where there are containers for paper, metal, garbage, glass etc. available, but people would not care. They would just put all together at their convenience and throw in the bin together. Mostly people would take big cartons or a big metal chair separately. However, hardly anyone would care if plastic shampoo bottle is in the same bag of kitchen food waste or not. To remove the paper from the plastic bottle would really be a far-fetched alien idea here. When enquired, I get to know that someone, who’s father works in the waste management office, said that oh, it is just a façade. They take all the materials anyways and put into the same block in the center at the end. This statement is enough to discourage people not to segregate their waste. Their was no background check done personally, no formal request made to office to validate or prove otherwise. No attempt to check in which stage this implementation of waste segregation has reached.

Waste segregation system can be a long process to implement. I am not sure how it is done in this place. But, one of the first requirement would be to have the waste properly segregated. Once separate bins are installed, once people are aware of this and when finally people are segregating it properly, the recycling plant can be changed to handle the new segregated waste. Not lot of cities would have budget to implement parallel systems and take the garbage based on its content to different facilities. On the other hand modern waste management facilities also have some small tolerance to impurities. If a machine is expecting primarily glass, it can manage small amount of paper as well as impurities. It can process that small paper and throw it away. An individual does not need to put too hard a effort to manage every small detail of the segregation. Of course it all depends on which kind of machinery is used and which stage the project is an so on. 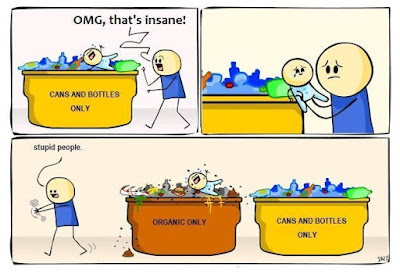 These seems like two completely different ways of handling waste. Not just that, but it also seems like to two different level of involvement in the process. However, I wonder if these widely separated attitudes meet somewhere on a common path. On that path they both satisfy their feeling to stand against the system. Of course one person like to go on street and hold a march against it, while the other may really go and prove that system can be changed or improved, while yet another may be happy to have a discussion over couple of beers. But the main feeling remains the same, that they are standing against system. Pretty much the same way a drama or a movie is made by different actors, directors and completely different team, but Superman would still weakens to krypton and batman would dream of his parents.

People would always do thing in their own way. This makes this world sometimes a good place and sometimes not. But, it ensures that world is always an interesting place. Won’t it be ugly, if everyone had the same smile and same laughter?

PS: There are always different perspectives. For one such, you can read the article “Recycling the triumph of feel-goodism over common sense“

Nasrudin began gradually reducing the amount of food he fed to his donkey each day, hoping to get it accustomed to less and less food. By day thirty, however, the much-emaciated donkey dropped dead.

“Darn it,” Nasrudin lamented. “I was just a few days away from getting this donkey used to living on no food at all!”