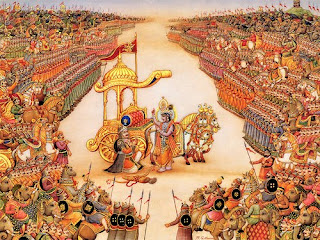 Bollywood movie Rajneeti after some limelight got released. I watched it for the curiosity to know what it was all about and also because of the Ajay Devgan, who brilliantly performs such roles. I found the movie quite beautiful, showing so many aspects of life especially keeping the politics in focus. I noticed the similarities of the story with the Indian mythological tale “Mahabharta“. It was just while writing this entry I found that it was intentionally inspired from the original. Surely, it was a beautifully execution of the tale, but it definitely provoke to ask the basic questions to one self.
Family feuds, some may prefer to call it personal issues; have been the center of major fights and cause of destruction in the history. The “prime” people in such cases had some motives. Be it power, money, land, women, the “drivers” always had something to gain as a motive to initiate the fights. But in all the personal fights of “Superior” people the common man has always suffered. e.g. in this case the “driver” of the family. The poor man was serving before, he served during the conflict while suffering the blows and he came back to serve once again. He had the mind full of duty towards his master. The only winner is the middleman, who will generally the most clever and and could be called himself e.g. Krishna in Mahabharta.
Question would why these stories are written and told for generations. Probably the Mahabharta was written only to emphasize the negative effects of such thinking.  But what has happened? Be it the Ramayana or Mahabharta or Mughals to Tipu Sultan to local business man to a simple farmer, the tale of family feud has existed across dimension of times and human social hierarchy. Nothing has changed, not with the time not with increasing knowledge or awareness. The mankind is still suffering with basic issues despite claiming to be the most intelligent species to “themselves”.
I believe that while writing such stories, people just go blank on one side. The writer probably only thought of the good part of humans that we are too intelligent and are able to learn quickly. But the ability to learn does not mean that we learn all the “good things”. It simply means that we learn, be it “wrong” OR “right”.
I am sure the stories will still be written and will be told/read till the time mankind lives. But to me, one of the most important thing that mankind has learnt is to smile. I wish that this learning will be able to sustain itself against all stories.
Love
Arundeep Singh

The rise of Doctors