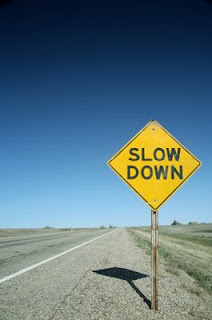 It was the end of 2004 or the beginning of 2005. I was in Allahabad then, doing my Masters. We had subjects on Artificial intelligence. This involved some study of Human brain too. Well, I have never been studious, but yes I did read sometimes :-D. I have always been thoughtful in an idle way.
One day, I was walking around the roads of the village where college is. It was then that this thought struck my mind. I realized and coined a theory that in order to make things effective, efficient and more meaningful and productive, it is required to slow down. Mankind needs slow down to be effective. I modelled it around brain. Human brain is slow in its basic nature, but still works too fast to handle many complex tasks. On the contrary, a computer works too fast the core level, but still lagging behind human capacity. Although I do not deny that one day computer may reach or surpass the Human brain. Time will tell that.
So, my idea was that mankind need to slow down at basic level like brain. On the contrary, everybody is busy today. No one as time. Everyone is running to achieve something quickly, as fast as possible. Surely many things have been achieved, e.g. computers, nuclear sources etc. But how much harm have these done to our planet!!!
I remember telling this theory to one of my friend and my brother. They rejected this idea immediately. And then I being me, soon forgot about all this, without ever dwelling or organizing this thought. After so many years, I saw an article posted on one of the blogs regarding the same. I was astonished and happy to read that. The article was interesting and so much aligned to my own thoughts. After that I searched a little on Google. I came to know that there are efforts on this idea around the world. But it seems no one had picked it at masses yet. Well it is a slow movement after all!!!!!! 🙂
One of the other reason to be happy about was that it was yet another thought, which I thought of indigenously in parallel with others.
So be slow and be effective. But first do understand what it means.
Don’t stop thinking.
Love
Arundeep Singh

Pay it Forward OR ARK?

Does more information helps us?