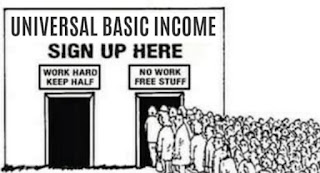 Universal basic income; I came across this concept just a couple of years ago. As usual it was a facebook feed and I did not give it much of a notice. Then I saw it few more times. Mostly it was shared with a background of positivity and humanity. Once I had a short discussion with one of my friends about it and her views were also that the basic income that enables one to live should be declared as fundamental right. Which in her mind was a beautiful and the kindest idea. For me it was like,” say what!!”.

Apart from the humanitarian reasons, other reason given by some is the advancement in Artificial Intelligence (AI). The fear is that as AI improves, there will be less and less jobs for humans to do. This notion caused lot of drama and trauma in the IT world last year. The same world, which few decades ago was in the similar situation as AI stands today. At that time fear was computers will take over the jobs of humans and no one would have any job left. I am not talking about AI singularity at the moment, that is another topic altogether. On one hand it may sound fancy and makes us feel special about ourselves that AI is doing all the work and we are just sitting and using our universal basic income for all our desires. For me this again is, “Say what!!” 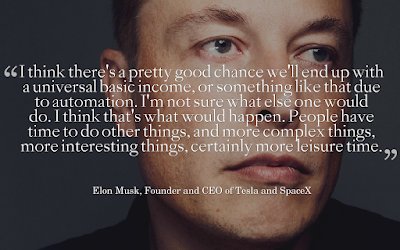 I wrote earlier about how we have tried to make our life simpler over the centuries. This did not always have positive effects. The universe balance itself with some negatives as well. Same happened with advancements in technology and same happened in the case of humanitarian thoughts. I have another draft about human equality pending, but I will use a part of it here to make a relevant point. The advancement in these fields made us somehow believe that things should be happening for us. We take the scenario of modern urban child/parent into the rest of life as well. A child ask for something and it just gets done by parents. If not at the first shout then kid knows that (s)he simply needs to make some drama, some cry, give references to other kids and viola!, here it is all that the kid wanted.

I work as volunteer Badminton instructor for University of Zadar. Usually after the training I have discussions with the program leader. She said that today she sees that students take everything as fun. They hardly have any zeal to learn or to compete. This as per her observation is the result of the modern education system. In the system schooling, sometimes up to university is arranged by public funds, so the kids never see how much they had to pay for their education. Secondly, they grew up in the world where everyone is appreciated just at different levels. They do not see the consequences as to what if they do not put any effort into learning or doing their objectives. By the time they reach that level of education or real life situation, it is too late. They are already fixed with mindset of everything is good and easy. On the contrary, she also see international exchange students who come to this university by paying fees. She observed that the ones who see the price being paid first hand are usually more focused and determined to put effort. Apparently same observation was given by a teacher in India. She said that in new education system we are not allowed to fail a student till a certain education level. Students know this and they just roam around, miss classes, do not learn. Kids know that whatever they do in class, they will move into the next class. Nobody can stop them! At the same time teacher cannot shout, beat, raise volume or any kind of other consequence. What these kids will do when they know, they have universal basic income?

I was sitting in a bar once and happened to talk to man who goes for some volunteering work. He goes to Sweden and works in some refugee camp to help with young children. He mentioned that the country is spending a lot to educate and train these kids so that when they are eligible to work they can put them into the workforce that is otherwise hard to find in their own country or is too costly to pay for. The young kids usually come from places where life is not that easy. For the same reason the government thinks that they will become good manpower later on. However, they provide them all the facilities, arrange food, shelter, transport, activities, games, festivals etc. for them. The kids get used to these comforts too fast and rather than being ready for the work later on they start to demand facilities. In his observance, the kids who walked hundreds of kilometers to escape from the harsh circumstances in their own countries, soon starts to demand a vehicle if they have to walk for more than a kilometer! If these kids know that there is universal basic income waiting for them, what would they do?

I met kids, who need a car or taxi to move a kilometer. They need their parents to give them a glass of water otherwise they would just stay in bed. Kids who have better phones than their parents. Kids who won’t wear clothes unless it is from some international brand. Kids who has to finish a project in one year and think 40 hours for their high school project is too much of work. Kids who are ready to pay extra money at a coffee bar or in the green market, rather than putting an effort to learn how to calculate the total or price of the vegetables. Reason given is always, “Why? Why to put all the effort? ” What would all of these kids do, if they know they anyways will have some money for them irrespective of what they do?

We have become used to the idea of rights. We demand hospitals, doctors, new roads, bridges, electricity, water and nowadays for sure Internet even if my house is the only house in the radius of 100 km! However, we still do not want to pay taxes, do not want to understand economy as it works, do not want to put effort to manage our own finances, we do not want to check our limits. As in general for big portion of population, it is easy to sit, talk, drink rather than do a run or physical workout everyday. It is much easier to take a pill rather than putting an effort to have controlled diet. It is easy to spend money and complain for less income rather than understanding the different opportunities available. Of course, I am excluding the population that is beyond these privileges, as they usually know the struggle of life and are not aware of universal basic income.

Apart from the way human behaves with ever simplified life and their reluctance to put effort, another point to think about is who is going to decide on this income. What is basic? How much money is enough to say that “my human rights” are met. Will this include my preference for bottled or carbonated water or I would have to compromise with the tap water. How many glasses of wine or how many cups of coffee would I be able to drink in my regular bars? Will I be able to pay for my monthly gym so that I can have the feeling of being healthy or I simply need to be satisfied with another human right of public health care? What if I want to travel to another country? Will my basic income would be increased to meet the higher living cost?

People complain about capitalism and politicians as to how one corporate or politician make some decision and they have to follow it. But they would not like to put the effort or take the pain to reach that level to make that decision. However, when it comes to universal basic income, we put all our effort to click likes and shares on social media about it. After all, if it does not work out then we can again go on streets to complain to those selected few who decided what should be my “human right income”. Or may be we would go on streets and complain on how corporates are making more money by using Artificial intelligence while paying us small basic income.

Well, the thoughts and discussions about universal basic income or other such ideas will keep on going. It won’t stop by my article or many other such articles. However, I simply hope that no one comes up with an idea of “universal basic smile and laughter” right. This much of smile and laughter is allowed to all and if you want to laugh longer or louder, please get a special approval!

Mulla Nasrudin was applying for a job. “Does the company pay for my hospitalization?” he asked. “No, you pay for it,” the personnel director said. “We take it out of your salary each month.” “The last place I worked, they paid for it,” said the Mulla. “That’s unusual,” the personnel man said. “How much vacation did you get?” “Six weeks,” replied the Mulla. “Did you get a bonus?” the personnel man asked. “Yes,” said the Mulla. “Not only that, they gave us an annual bonus, sent us a turkey on Thanksgiving, gave us the use of a company car and threw a big barbecue for us each year.” “Why did you leave?” asked the personnel director. “THEY WENT BUSTED,” said Nasrudin.

Smile – Is it really that hard?

Simple OR Stupid OR Logical OR illogical or …?