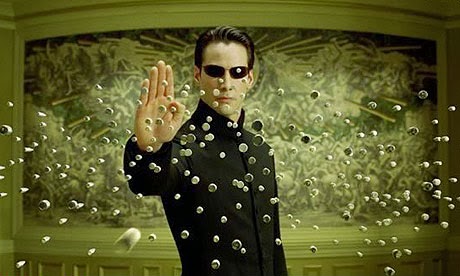 Matrix; I learned this word in one of the maths class. I do not remember which class was it; thanks to my short term memory. I learned the concept of rows and columns and whole lot of calculations in matrices. The relation with matrices remained during bachelors of engineering while learning MATLAB. During my masters when I was trying to learn Artificial Intelligence, I really needed it as I struggled with mine, one of the American professor gave seminars on matrix based hardware processors. Latest relation with matrices was through wolfram alpha, the matrix based computational engine. However, one Matrix which is really special, not just to me but to whole lot of others is Matrix (the movie).

Matrix is the probably one movie that I can watch any number of times. In fact I have already watched it a lot. The movie was a really a landmark in graphics technology in its time. At the same time it also challenged intellect of the viewer. I was doing bachelors when the movie was released. I remember watching in 2-3 times to understand what happened behind the mind blowing animations and fight scenes.

Recently, while I was just scrolling through my TV EPG (electronic programme guide), I found it in the schedule. I immediately put in the reminder and waited for it. I thought I could read my novel while matching the movie. However, as the movie started I realized that I did remember the parts which actually set the theme of the movie. All I remember was Morpheus teaching Neo in beginning,  Neo stopping bullets at the end and all the running and chasing in between.

Main concept of the movie, to me, was the illusion of reality. Is it real what we do and feel every day or just a dream. This was actually not new. In some eastern mythologies, it has mentioned that we all  are mere characters in the big play. No body knows who is the producer/director or script of this play; some preferred to call it God. Anyways, this is a big topic in itself. May be I will write about it some other day. But, this time when I watched the movie, I found myself asking why machines needed humans to generate the energy? Definition of Matrix. In the fight between Humans and machines, sky was covered and there was no way for sun rays to penetrate the earth. This created energy problem for machines. Machines realized that humans created a lot energy and found them useful as their power source. Thus they captured all humans and connected to Matrix system as power source. Humans were genetically engineered and no longer were born naturally. To keep the human brain busy they connected to virtual software side of matrix what humans started to believe as the real life. Like any other movie people always find some technical faults in a movie. Matrix was not an exception. However, I was thinking that machines were really powerful, they

With all that fictional stuff made possible, how is it that they could not create the required energy straight from the food/supplements they were giving to humans? If anyone has thought of it or has understood the movie better, please leave a comment. Coming back the main theme of illusion and reality, I do not know, if we will ever find out what is real and what is not. This gets complex when we extend the concept by adding layers of Matrices. e.g. what if the real world shown in movie is also Matrix but one level up. This concept kind of relates to the Hindu Mythological concept of time in relation to Devas and their level of life. Independent of the Real vs Matrix or the level of life in the Matrix, I believe we can still choose to smile and laugh. I am certain these are the attributes that exists in all planes and carry a positive force. Keep Smiling Arundeep