Skip to content
Other day I watch the movie Blind side. I must say it is an amazing movie based on a very inspiring real life story. It was so simply delivered with such an elegance. It was so full of messages to learn. I was amazed to know that it is a real life story as it look so ideal to be a fantasy. I was touched by this story and some of the messages for me are below.
Care about others. Be it Michael’s uncle, who took Michael along with him to school and asked the coach. Be it the teacher who care enough for a strange student in her class, be it S.J Tuohy who simply get along with Michael or be it Leigh Tuohy (Played by Sandra) who care about the boy. At different levels as per one’s capacity one can care about other. It even be just to smile at other.
We need to find positive attributes about people and highlight those rather than keep on pushing on negative parts (Which is more dominant nowadays). Michael was taken a dumb studen

t by everyone. It is only one of his teacher who put the effort to know him better and find out that he does have learning capacity. Similarly Mrs. Leigh Tuohy finds out that Michael although was quite bad at everything but he was exceptionally high on protective instincts.
Every person’s learning capabilities may be different. We need to find ways to teach students and not classes. This what Michael’s teacher did and he scored well in her subject as well. Similarly Mrs. Le 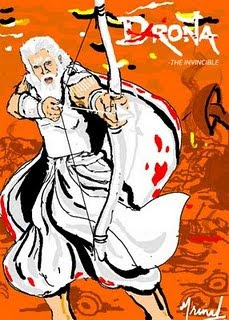 igh Tuohy was shown to use his strength of protective instincts to teach him football!!! The method was not the same as for other players, but the result was even better.
Every person is different and have different qualities like various players in Football team. Not everyone can be a quarter back. Even if we go back to mythology, the teachers then used to judge the quality and interests of student and then develop his skills accordingly e.g. Pandavas, Kauravas and their specialities observed and developed by Dronacharya. On the contrary, today it is completely different. We have a gap to fit and any person would be randomly chosen to fill that gap. It does not matter if the person is fit for profile. Another variation is that we expect everything from everyone. Imagine if Acharya Drona would have gave the similar rating to Bhima or Arjuna as average of different skills would be same although one is best in particular skill!!!
What if Drona would have also standardised his evaluation criteria? Unfortunately, that’s the only thing we have today, Standardisation!! Or is it because today we do not have the capable Dronacharyas?
For sure at the end of the day, it is a person who will grow and succeed. But, if at least if the required environment is provided we may have many more Michael Ohers.
Love
Arundeep

We are where we are at the only time we have