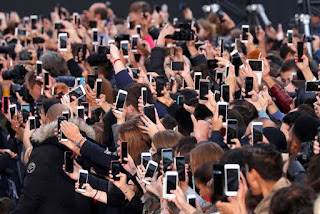 I wrote earlier a little bit about the click-generation. One can find many articles about it; what it means, what are its effect and so on. In short we call the current kids generation as population of click-age. It is a common topic about adults as to how kids are so used to mobiles and tablets and their apps. The kids start to get the feeling of the click almost at the same age as they start to feel and realize that hands and fingers are meant to hold objects. Some even know the value of click before they can say mama and papa! Of course these infants grow-up with their faces and hands fixed to their mobile phones.

Mobile phones connected with Internet gives amazing power in the hands of mankind. It does not matter, f you know how it works and what goes behind it. What most people care is if they can get some output. For consumer it may be mean as simple as smiling cat to finding recipes to navigation to watching videos and taking online lessons. For producers in one or other way it means to get some dollars in the account. While it is normal for market to exist, but it seems to have provided a powerful tool in the hands of “marketing guys”. Here the intention of marketing is any person or organization who want to convince and control people to market/sell their products or services or agendas. In earlier time it was done, but it needed much more effort, investment, planning and still one would reach a small amount of people. Today, with one click on facebook more than billion people decide that 4 people killed in Paris is much more importance than thousands people dying in Bangladesh or hundreds of hectares of de-forestation in Amazon forest or thousands of girls and kids transported in human trafficking. All this can be decided by just click on facebook app.

This is what we are used to now. Just one click and we believe that we are part of big movement. It makes people believe that they are the one who are actually doing it by giving a thumbs-up or down to an article on facebook or youtube. How hard it is to click a button on an article that makes some relevant talk about some politician or capitalism are bad or nothing is done about global warming or our oceans are dirty? People pick their preferred smiley and we can be satisfied that we have done the effort. We have done our part to solve the problem. There are some who are ready to put a bit of more effort; they go to the extent to share the article or even more leave a comment “how sad it is that nothing is done, someone must do something”. The one leaving such a comment have his/her heart content that (s)he has made the best effort possible. This (s)he cannot be blamed if (s)he buys a coffee in disposable cups for a 1-2 hours of boat ride; afterall (s)he has tried and there is no solution to this garbage problem.

Pareto’s principle in simple words would mean that 20% of the people are doing the real effort while 80% are either just talking, not doing anything or making one or another comments about it. I believe that, with this click-age, pareto’s principle is getting more skewed towards 1-99 principle. It is valid in some cases e.g. every year less %age of people have wealth equivalent to the rest of the population. More and more money is going to specific people, be it a sportsman or movie star, fashion industry and so on. In other scenarios it is a bit hard to calculate these ratios objectively. I am not sure if anyone did such studies, but I believe it is valid in other scenario as well. E.g. how much %age of people are really working to stop or reduce plastic usage? How many are trying to clean the oceans or to reduce the dump into it? How many are trying to reduce food wastage? How many trying to use public transport/bikes or walk to avoid fuel consumption? How many have stopped putting grass in their lawns to stop water wastage? It is hard to calculate, but ask yourself, what did you do and how many you know around you put effort to contribute in those ideas/topics.

One thing about our mind is we have default brain connections that makes it easier for us to pick up an easy task now rather than a hard task now that would end up giving positive results in long run. E.g. in modern life it is easier to buy milk, yoghurt, cheese, butter from market. How many are ready to buy pure milk and work on daily basis to get all these products are home? We prefer to pick a milk carton as we do not need to worry about milk getting bad on 2nd day and wasting time and effort to make all these things. In the background buying more and more cartons, plastics, aluminum and so, which will be thrown in garbage! I am sure we are still smart enough to think of another such scenarios, despite the fact that we have kids now who believe that milk comes from cartons and cows have violet color.

We love to associate ourselves with success, even we have not done anything for it. We can see that in regular activities around it. When e.g. football player Messi/Ronaldo scores a goal, people from Argentina or Portugal or the people who follows their clubs feels like they have made that goal themselves. Recently I was in a discussion about how such a low percentage of people are active in sports in a city. The another guy immediately mentioned 3-4 players are really good. His statement was so what if we have less number of people active, but when we have they are the best! It simply shows how happy we are someone else is doing the effort and we can just be proud because we can find a connection with him/her. We do not want to hear anymore that we have something to improve. But we are happy talking about other’s success. It is so strange that we dislike the same idea in different context. E.g. if I say the politician from my city made so much money that he is richer than any other politician in other states. Or it could be a businessman who made a success while I am still standing behind a counter selling books. I would be happy for player or actress making all the money and success, but not the businessman or politician!

I believe the click-age has contributed a lot to this kind of mindset and thus in skewed pareto’s principle. When everything is possible with a click on the mobile phone why do you need to do anything more. Click of a button can get the food delivered today or get a cook delivered at home and even garbage can be collected at home, considering what you are ready to pay. So why waste time on cooking some food that can used on some more clicking. Why do I need to do anything when I get the feeling of doing it by liking or sharing what someone else has done. What is important is that in the social group people notice that I have supported someone. We in-turn believe that it is our own contribution. We start to associate other’s effort with ours effort, thus we stop to make a real contribution. People are happy to watch motivational videos or yoga videos or how-to-be-fit videos, but to go out and make a run is too much waste of time and effort. Today scientist says that even if we think that we are exercising it helps, but we apparently do not have time for that too!. This leaves us with less people who are actually making the effort to do something. The last and I believe the really dangerous part is that now the work becomes just too much for these 1% to manage. So, either they give up or they go negative or they start to create their own support system. About that I may write another time, but to give a hint it leads to singularity.

I hope people would start to click less to make a cat smile and spend more time to find a person to share some smiles and laughter. Maybe that may bring the balance back.

Mulla Nasrudin had been arrested for stealing a hog. The trial was short and sweet. There was no concrete evidence against the Mulla and the judge dismissed the case against him. But for some reason the Mulla seemed not to understand. “The case is dismissed,” the judge said, “It is over. You are acquitted. You can go.” “WELL, THANKS, JUDGE,” said Nasrudin. “BUT DO I HAVE TO GIVE HIM BACK HIS HOG?”

Caste system and domestication went for a walk