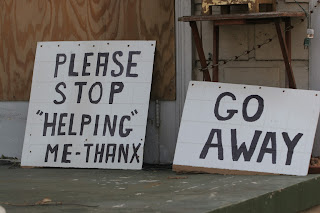 One of my friend is fan of macrobiotic food. Till I met here, I did not know there exists such a “class” of food. I knew vegetarian, non-vegetarian and even Jain food. Other classification, I knew was based on countries and regions e.g. Japanese, Chinese, Indian, Italian etc. I learned that macrobiotic food has and is developing like a culture and there are special courses just to learn this style of cooking. It even has special restaurants, where only macrobiotic style food is cooked and you can become members of these ” restaurant groups” as well. This is one thing we as humans do the best; classification of almost everything that we know and in-turn them give them ratings and of-course later fight about which rating is by whom is the correct one. This article was born when I got a chance to visit one such special restaurant with her.

She took me the restaurant, introduced to the food area, their system of becoming members and why they are special. She also informed about the picture of man, that was hanging on the main wall of the restaurant. After we settled down and gave the order, she told me about her thoughts about helping people, based on her personal experiences. She had a friend, which once told her who is she struggling with money. She does not have enough for food for clothes and daily life and so on. She thought it would be a good idea to help her friend in the current situation. She gave her friend some money with thoughts that soon her friend would be out of that situation and can get her money back soon. After a year she still did not get her money back, her friend still had the same story to tell. Worst part was that her friend used that money to travel somewhere instead of investing in her life. She had other similar experiences that led to make her mind that one should not just give money to other assuming that it help them. One should try to help in way that makes them grow by themselves as individuals. Or only provide financial help when one really asks for it means to use it well. Is the only one with that kind of experience? I bet no.

When comes to helping others, social workers and NGOs cannot be left behind. If you look around you will NGOs for almost everything. Feeding the poor to “free the nipples”, for every topic one can find some socially aware people working hard to change the situation. In some cases, it just like a birth right of some people to help others. They feel bad, if you do not drink the same water as they do. So they will keep on believing you are in bad situation, unless they find convince the rest of the world to give money to their organization so they can provide “Evian” to those people who were drinking water from well. This way they have something to keep on working to convince their own minds.

I think an anecdote is quite valuable here. Once a group missionaries decided to find some place and some situation where no one else has managed to reached so far to help others. After a lot of search they found some small kingdom in some faraway land. The kingdom was small and had just enough resources for their way of living. They were living with usual cycles of life; sunrise to sunset, birth to death, winter to summer and so on. They had one special situation that every year during summers some disease will happened and many people/kids would die. Missionaries spent couple of years to research the disease and find a cure. When they did cure they approached the king and told him that they can “help” his kingdom. King invited them and asked to present their proposal. They told him that his kingdom has terrible situation and people are dying every year for disease. We can help them by providing medicine to those people and save many lives on annual basis. This king was known for his strange wisdom. He told them, ” Thank you for the offer, but No. We do not need your help”. Missionaries were surprised and asked him the reason. He said, “You say that I have a situation that many people die every year. Give me one another country or place where people do not die every year. I know that people are dying, but this is natural order of things. We are a small country and we have enough for the people who survive every year. Those who survive are strong and happy. They are not complaining about this disease. If you start to save those people with your medicine, you rather than help will open a Pandora box of problems. People will get used to your medicine and will start to depend on you regularly for help. We will have more people to feed every year than what we can manage. We would have to then either depend on some other country for resources, or move to another country or invade another country. And you know that you may take care of one disease, but do you know what else may arise in future?. I understand your intentions may be kind, but we are happily living here with natural balance. So, please find someone in your own place to help”.

Now these are just two different stories with different context. Once can of course decide for oneself. However, is it so easy to decide whom to help, when to help and what to expect? Some say that “help without any expectation” is the real help. Is it so? Is it really so or just another fantasy created by human mind? When a child cries a mother gives her milk. In one way she helped the helpless infant to have some food and satisfy the hunger. But did she not expect that in turn the baby stops to cry? I was never there, thankfully, in a war. But I heard that when a person was seriously injured in the war, then the enemy would “help him to die”. No we have so many sick, injured, retarded people alive in hospitals, special homes and school. They were all “helped” by someone with one or other reason in their mind. Which type of the help is the real help for the person in concern? A mother sells her child for less than a dollar; because she thinks that her child may get out of the hunger, drought, thirst, torture that she has in her life or just she would have something for herself for a couple of days rather than feeding two stomachs? If you buy that child, are you helping them? What else would you do to help them? A couple cannot have a baby, so they ask for surrogate womb. The lady who provides her womb is helping this couple or herself or she is actually destroying the culture and taking away chance of some other orphan kid somewhere?

It is clear that subject of help is not that easy to decide as traffic light signal. On top of that the person who is receiving adds to complexity. You never know what that person will think of hat help she received. She may simply say that you decided to help me, I did not ask for it, so get lost. Some are even more special, they will ask for help and if you provide it. They may still say, ” yes, I asked it. But, it was your decision to help me. So, don’t you dare say anything to me”. I think this is till not that complicated. I have come across some people who are just too special. They won’t ask for help. If you ask them, “do you need help?”; they would say “No, I am fine”. In general discussion they may tell you, I don’t like taking help from others. Still on other occasions, they won’t fail to mention, “See, when I was at her place, I helped her when she asked for it. Now, when I need it, and she can see it, but she still did not bother to ask if I need any help. What a strange person she is!” I was confused even writing the last statement on how twisted a human mind can be.

We have reached a state, where we want people to help us, but they way we want, at the time we want, with the things we want and of course with a condition that it does not leave any baggage on our shoulder. If the person offers her help but I happened to be drinking my beer, then of course I need to have right to say, “Look at these people, they do not even know when to help!”. We re actually a step further, we want people to help us. We want them to ask us and literally force a help on us. So that we can still tell, look how pushy these people are! I mean you can help, but you must check with me first, if I am ready for it!. One the contrary, some are so desperate to help others, they do not care if you need it or not, they will just push their help on you. For one such example just search for free western women helping struggling middle-east women forced to wear clothes!

I am not sure, which way we go with helping people, but I hope people get better at smiling and laughing without help. I hope people feel less afraid of laughing because they were sitting in some socially constrained environment or they smiled because social convention dictates it. Maybe if people can express their happiness and sadness easily, then they do not need others to fulfill their own needs.

Mulla Nasrudin called on the minister and told him a distressing story of poverty and misery in the neighborhood. “This poor widow,” said the Mulla, “with four starving children to feed, is sick in bed with no money for the doctor, and besides that she owes $100 rent for three months and is about to be evicted. I’m out trying to help raise the rent money. I wondered if you can help?” “I certainly can,” said the minister. “If you can give your time to this cause, so can I. By the way, who are you?” “I AM THE LANDLORD,” said Nasrudin.