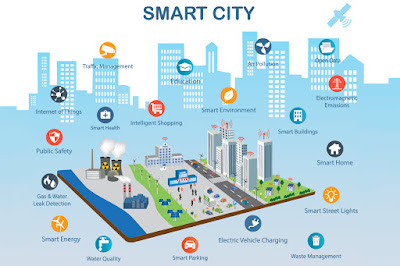 Everything around us is slowly becoming “smart”. To be true, I am not sure if they are becoming smart, but they are definitely being tagged smart. After all smart is something subjective, isn’t it? In a normal conversation one can call a person dumb/stupid etc. who is holding a smartphone or wearing a smart watch! Use of smart also shows how we get attracted to words. Computers has longer existence than mobile phones. They also kept on adding more and more power and new functionalities with apps and app stores. But, nobody every tried to sell a computer as smart computer. Today, I am sure, if someone even decide to tag a computer as smart computer, it won’t find customers, but it will definitely find a lot of critics. Critics not about the applications or functionalities, but just the name. After all how a computer can be smart, it is only reserved for phones, watches and other “gears”.

Smartness is not just limited to individual gadgets. We are developing smart houses, smart buildings, trains and even smart cities. There are many big companies to small entrepreneurs trying to get the hands and bank accounts linked to this market. The usual fight of proprietary and open protocols continues in this domain as well. On one hand people do not want to be scanned at security check-points e.g. airports because they find it to be violation of their privacy. If you are outside or in a shopping mall or public event, people do not want if someone comes closer than a couple of meters. On the other hand, people seems to be ok to have all kind of devices installed at their home, that have the capabilities to map and send exact layout of their houses and apartments and even their communication. Device can check all your health vitals, location records, activity and may even suggest that you are obese and need to workout. However, if a doctor tells you the same, it can be considered offensive enough to file a litigation.

I went to a smart city conference this week. It was about developing application/program/system to enable smart city solutions. There were about 9 teams who presented there ideas. 3-4 of them were about traffic management and parking etc. One was about creating yet another virtual mobile wallet with virtual currency to avoid carrying many cards or cash to buy tickets, groceries etc. One presented a way to get people to volunteer based on their available time while another presented a way to have a dynamic parking and bus ticket prices based on traffic and thus air quality situation to force people to avoid taking cars to cities. Yes another wanted to install cameras around city to capture badly parking vehicles or someone driving in wrong zone and integrate it with police network to control such situations. Unfortunately, there was no chance to ask those people about their views on NSA and Edward snowden case as an example.

Almost all ideas were connected with some percentage money based on transactions or communications etc. There was one which was presented purely based on intentions with no mention of financials and percentages. It was presented by high school kids. For me this presentation was really interesting as they made a nice working website with generated data. In a short time they also made a small hardware to simulate the situation. Their idea was to control the intensity of street lights based on the traffic conditions to save energy. They even collected some data on lamp types installed in their locality to get the average power ratings for their model. It also included an alert and warning system for city department to notify them about damaged lights. Unfortunately, they did not win but they were really positive and encouraged by this experience.

I spent about 5-6 hours in the hall. Of course, that gives one a chance to observe. It was not that hard to see that while one dustbin was empty, the other was overflowing and people even left things around it. In the bathroom, the dustbin was too small to capture all the semi dry fluffy paper towels. The area of about 2-3 sqm became the effective dustbin about which apparently nobody bothered about as they would, without even a blink of eye, throw the paper toward that general direction. Tobacco industry is so strong that it only allows authorities to put some labels and messages about the harms that it can cause. But they know very well how strong a person gets addicted to it. This also makes cigarette butts a common litter. People made use of plastic cups, water and paper tissues to create their portable ash trays. They were all spread around the walls of public street. Some found it easy to just throw them in a small patch covered with grass. Scene was not so different in the auditorium itself. People will bring their plastic water bottles or cups with coke or juice. It is ok to drink in the hall, but apparently it is too much of effort to take it with you and throw it in the bin. Even if someone kicks one while passing through seating rows, it does not struck them to take it and dispose it. They just seemed happy that it is not in their way anymore.

Soon, it was the end and they were all getting ready to announce the winner. While they were getting ready to receive the prize, I was wondering about the idea of smartness. First of all, do we need smart cities or should we be investing on smart people? Is it smart to let a person implement the project to take care of city traffic and pollution, who cannot control himself to stop smoking or throw a litter in the bin. Or is it the case that we need cities and gadgets to take care of the garbage and mess that we make around? Maybe we have given up on the mankind to be a little more thoughtful, aware and alert and we trust a machine to get things done. I am not saying the idea overall is bad. The one I highlighted above is an example where really it can provide a lot of energy savings with effective use of power and thus less pollution as well. On the other hand, if you need a device to tell people that it makes sense to take a bus rather than take your own car or they need to do 30 min of exercise then I am not sure what to say. Will it solve the situation? Has all those ugly pictures on cigarettes stopped people from smoking? Has all the warnings on carbon foot prints stopped people from taking air-planes even when they can take a train? How many campaigns have been created against fish hunting, animal farming, fast foods? Do we need to make machines to cater to those a well?

I am not sure what are the reasons. Some people blame education, some blame politicians and other capitalists about all the problems. But do we really think it is the fault of education system that people cannot see a dustbin? Or the education system fail to make them understand the warning labels on alcohol, tobacco and other products. It is the capitalism which is forcing people not to always buy plastic bags for their groceries? Or is the politicians that are making people to throw beer cans or bottles or other things in the sea?

Maybe smart gadgets and cities will at the end help the human society to manage their self created mess. Maybe they will just add more to existing piles of dump. But I hope that it does not come to situation that we would need some smart gadget to tell us when and how to smile.

One of the neighbors found Nasreddin scattering crumbs all around his house. “Why are you doing that?” he asked.
“I’m keeping the tigers away,” replied Nasreddin. “But there aren’t any tigers around here,” said the neighbor. “That’s right,” said Nasreddin. “You see how well it works?”

World of disclaimer’s and policies

When I got asked the ultimate question!!