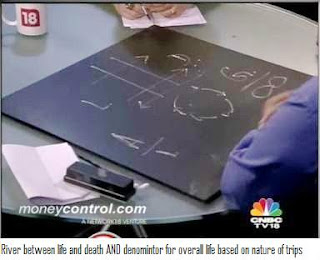 There is so much information is being generated across the world at such a fast pace, that even to read the headlines generated in 1 minute may probably take days to complete it. Even if one become selective to his topic, he may not be able to know all the resource for the information. Thanks to the distributed cognition of human mind enhanced by the technological advances, once may come to know of many new things. In the same way, I recently watch a presentation on moneycontrol.com about the Indian way of doing business. I do not remember who shared this link. The link was also not of direct interest for me. But still it had something, which hit few old and new strings of my somewhat rusted memory.
This reminded of the book by Arindham Chaudhary ; Count your chickens before they hatch.  The author described a concept of i-management. I remember when I read this book about 7 years ago, most of the people around me, did not like him or this idea. I for some reason felt it is a good idea. This news clipping felt like supporting the same concept. Well, that is another thing that till today most of the management schools run their business using Harvard’s case studies. I may not remember the complete concept of i-Management, but I do remember, it was challenging the crowd and was asking people to come back to their roots.
I have always been against the conditioning of mindset of kids. From the beginning, kids are conditioned to think in a certain way. What other reason do you think that their are some many fights over religious theories. Just because kids are conditioned to believe that one is superior to other. The kids who smiles the same way, cry the same way, cling to their mother’s breast the same way, how do they grow up hating each other!!!! Sure survival is the basic instinct, it can remain at the basic level and need not become sophisticated. This video shares the impact of conditioning in a a very powerful way. The statement, “Alexander thought that doing nothing is such a waste of time and at the same time Gymnosophist thought that doing anything is a waste of time”. The reason is nothing but the old age conditioning behind it, once again explained beautifully.
It also reminded me about the discussion, I had few months ago with one of friend. I was getting educated about the Christian thoughts/history/believes from him. He told me something about the message about the “one life”and the need to “deliver” in this life itself. More or less I was aware of this already that Christian and Muslims consider life as one time experience unlike others like Hinduism. But I never attached it to the concept of delivering. As soon as he mentioned this, it struck me that this is the reason why Christian and Muslims probably grew up to be the biggest religions in the world despite that other like Hinduism, Judaism, are believed to be the oldest of all. It is not just about the widespread presence of this religions, but also how they tried to “fast pace” the life. It is simple to understand, as they have only limited numbers of years to show their importance. I must say, this was explained in the most beautiful way in this video by combining the mathematics with life.
It is good, but is it bringing any change. I doubt. As not many people want to change just to experiment, especially when the stakes are high. We try to do more of the same to have more profit. It applies not just to business, it is the same in many other areas too. Be it education, be it collection of food etc.
I know that even smile is used to get some benefit out of others. But, once for sure just try to share the smile just the experience of sharing. You may not loose anything. And beauty is, it can be done without thinking about western or eastern way.
Love
Arundeep Singh