Skip to content
via MEME
The Lucy series is a new idea. But it does not mean that old stories cannot be mapped to this theme. Important is to match the story with theme. Keeping that in mind, let’s make a visit to the past. I wrote earlier how we do not have time for almost anything as we are too busy doing other things. It was during that time, when I was asking Lucy to meet for a cup of tea. Whenever I messaged her, she always had some other pre-occupations. I told her it would be easier, if she would call me. After a couple of months, we met on a street by chance. She asked me almost with a shock, “Where are you? I have not seen you in a long time! You almost eloped somewhere!”. I was in even more shock than her. I asked her, “What do you mean? Where did you look for me? Did you call me or message me?”. She was a little backfooted now and moved the topic forward. Then after couple of minutes she invited me for the long pending tea on upcoming Thursday.

Because of tea or maybe just usual behavior, but I reached Lucy’s home right on time. It is no fun to sip on a cup of tea, if you start the conversation with, “you are late!”. I do not remember which tea it was, but I do know it was some nice herbal tea. Topped with some cookies, it made the setting just perfect to flow into any kind of conversation. After jumping from topic to topic, at one point we reached the topic of taxes. She mentioned that taxes are bad. I countered that it is those taxes that help to build public infrastructure and other public services. She then said, “Oh, I don’t mind taxes, but “they” are corrupt and do not use tax money for the right purposes and to provide appropriate services. The taxman is bad!”

Now this is not a topic that is connected only to Lucy. This is a topic that is related to almost every adult at most places on earth. I am sure the sentiments of Lucy will be shared by a lot of people. However, most of the conversations I had with other people and that day with Lucy also was a discussion of feeling. In these discussions the decision is already made and that decision is taxman is bad! The decision usually is not based on any data. Rather the decision is based on a feeling or some emotion. That emotion can simply be that someone is taking your money and that is bad. I suppose this feeling can have the same root of the feeling raised in any animal when another animal tries to take their food. One can see this in dogs, cats, birds, fishes and so on. When there is a visible piece of meat available, everyone feels that the whole is for them. Even if they don’t finish it all by themselves at the end. A tiger may leave half of the meat behind when it’s tummy is full, but till the time it is eating, it won’t allow any other animal near it. Same would be done by other animals based on their power on other animals. I would argue that it is the same feeling deep down which makes people take that decision, when they see their payslip. It is clear that the amount at the bottom is less than the amount at the top. We see that top amount as the whole portion of meat that is ours. And all the deductions arose the feeling of anger against those “invisible animals” taking away our meat. The feeling that taxman is bad in this way is nothing more than another animal taking my food. 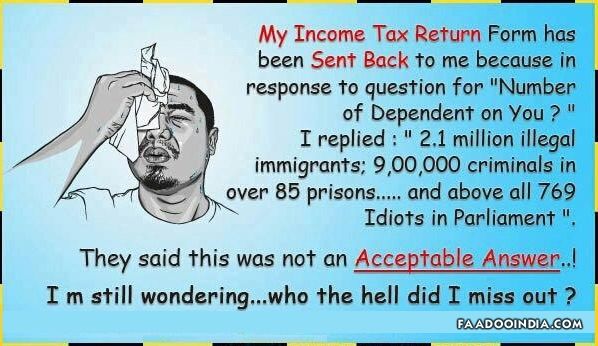 If we believe that assumption, then the question is what are we going to and willing to do about it? In the jungle the hierarchy is more or less set among species. Within species as well, they have their way of settling priorities. The stronger one usually gets the bigger portion. But it does not mean, he is relaxed. He is working all the time fighting against others to keep his part with him. At times, he may get bruises, get injured, but he will fight till he can. That fight usually stops only when it is clear who is dominant. In that case there is no fight, no debate, no questions raised. But the main point, is that either that animal will fight or will accept its position in hierarchy. You won’t see a tiger sitting on the side and moaning that how it is bad that other one took his portion. There is no discussion or proposal that because they all are born tigers, so they all have the same right on every given portion of the meat.

Ofcourse, humans at most place on this planet has taken their fights to more complicated levels than just direct physical fight for a piece of meat. But at the end, the fight is still there. It maybe for position, reputations, beauty, bigger cars, bigger homes or anything else we can imagine. Somewhere during that transition, we introduced morals and ethics that helped in many ways to build and maintain ever larger communities. For some reason, people believe that they are natural laws, like the laws of physics. We forget that they are just creations of human mind and even the laws of physics as we have defined so far are not beyond questions and assumptions. Many of us believe those as fundamentals of life. However, I believe that lot of that is simply to make “my life” easier. It does not matter, if someone else is working to make it happen. Even if someone else has done the work, at the end we both still have same rights as we both are still humans. This comfort of ease blended with above emotionally driven decision and backed by extreme morals and ethics create a situation to sit and say, “taxman is bad”. Isn’t it that when it comes to evaluate others, then we would do that on a theoretical 100% benchmarks. But, if it is about evaluating ourselves, then we suddenly become aware of all exceptions, complications and ambiguities of life.

I asked Lucy, how does she knows that her tax contribution is not being properly utilized. She gave answers one again general to the extent of road conditions or hospital facilities and so on. I asked her again , does she know how much would that cost to build, deliver and maintain? Has she checked what all has been done with that money and how much was spent for those? Has she checked how much of the overall tax the country received compared to the population there is? Answer to all those was as expected, No. She reasoned that she does not need to, after all this why there is a taxman and they voted for them thus helping to form the government. I pointed to her that it is the same behavior of finding a way to handover tasks to others to make our life easier. All we did was that we went to a room on a given day and put a piece of paper in a box. With this simple act from our side, we expect that someone will give us money, take some part of it and build everything around us to make our life easier. Our expectations are so high, that we do not even want to check what has been done at what cost. We do not even want to understand, if there are ways to do it and if there are ways then how to use it. All these expectations from whom? From someone, who we never met in person! From those, whose picture we see in newspapers, TV or posters around the city? The posters that said, “Follow me and I will take care of everything for you!”. I don’t know, but this sounds like another famous character that we have created over thousands of years. Seems like, we are giving it a new shape now.

Lucy by this time was too emotional. She either realized that it is in fact was a discussion based on pre-made emotional decision by her or she was now trying to find another easier way out of this discussion. She said that I am taking taxman’s side and trying to make things look much better than they are. I told her that in my mind I am not doing anything of that sort. Rather I am questioning, where do you stand in that discussion. You want to drop a paper in a box and then go on a world tour. I asked her to check in her life, how people deal with much simpler transactions and that too with those people who they know in person. I asked what do you think if, in a family, sisters or brothers selected one guy based on voting in a box then handover their responsibility to the selected guy? Do you think, the family members expect now that they do not need any means to check, if this guy won’t take ownership of all their property? How do they check, that he won’t sell everything and kick them out? She agreed that people make contracts and papers to safeguard themselves. Even a brother or a sister won’t just give money to their own siblings without control or effort on their part. But the same person have extreme trust and expectations from taxman. Isn’t that weird?

Well, by this time tea was almost over. Cookies were so delicious that Lucy had to open another packet. Thankfully she had more or I would had to go out to buy some. Lucy was very frustrated now, but I reminded her that despite all that she is still free to smile and there is no tax on that. She can use it as much as she want and can spread it as much as she like. The only person making decisions is She, without any interruption by a “bad taxman”.

Mulla Nasrudin was stabbed by burglars. But before dying he wrote a note to his wife from the hospital. The last paragraph of it read: “I have been very fortunate because only the day before I had put all of my money and negotiable bonds in my safety deposit box at the bank, SO THAT I AM LOSING PRACTICALLY NOTHING BUT MY LIFE.”

The role of TV series in youth development