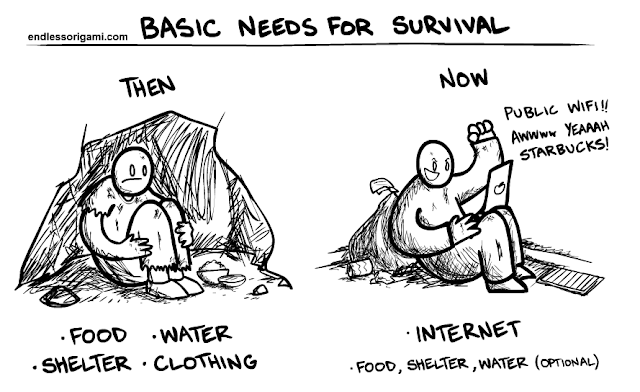 I am not sure how we start our thought process as an infant. I believe at that primitive level, when our cognitive development is probably lower than many young mammals, we are biologically engineered for our needs. The baby cries because it needs food or there is something uncomfortable. I do not think if the mother tries to feed the baby, the baby goes, “What the hell, same old boring milk again!. I want to drink passion fruit juice”. Similar I think is the case for wild animals as well. I am not sure a hungry lion looks at a lamb and says, I ate that 2 days ago and continue its search for hyena, as that meat was something special. Did humans once lived their whole life based on just needs? I am not sure. Probably by the time we became homo sapiens we already had more wants than needs. Among other things these wants made us special, made us “superior” to others. It was these wants that kept us going far and beyond independent of the consequences.

Based on the available data, the needs to wants conversion took hundreds of thousands of years, if not millions. However, the rate of this change was not always constant. It was increasing all the time. As the time passed it kept on accelerating to reach a state where we want everything right now! I do not think there is any special biological or social cause to it. It is simply like a stone falling down the mountain which do not stop. If that stone happens to fall at a right place, it can trigger an avalanche. It is interesting that scenarios found in such non-living objects can describe the story of much more complex human psyche. Some stones start an avalanche while many others no body even notice, apart from some nearby animal. Same way there are a lot of wants that no body even bothers about, but while others can start or end an empire, can make or break civilizations.

I have no idea what did people want thousands of year ago. Maybe yet another sunny day before the long winter started so that they can finish their packs. I assume as there were less parameters, there were lesser things to desire as well. On the contrary today we are stuffed with parameters. So much so that we do not have even an idea what really matters and what not. Be it the electronic gadgets, variety of clothes in the market, things to adore walls, exotic and super foods in the market or the information overload from the Internet. One can find many more such dimensions to create parameters. We can make topics from field of education; physics, chemistry, mathematics, arts; or sports; football, tennis, badminton, cricket; or jobs; farmers, engineers, architects and so on. Every such division simply add more and more things for which we create our wants. We seem to have reached a level where we do not have capacity to understand our wants and their relationships with other wants.

There are some big wants which remain mostly just a want for majority of people e.g. I want to be the richest person, I want to be the best footballer, I want to travel the globe, I want to be the queen of England 😁. While others are day to day easy wants e.g. I want to eat chicken today or go to a Chinese restaurant or to eat in that new place where they serve few strands of grass cooked in oyster sauce with a slice of orange for about 200 USD!. I want to buy new clothes, I would like to go out for drinks today, I want to buy a car, a painting, a phone, a dog, a toy maybe. If we manage to finish the list of objects, then we start with next level. I would prefer some clouds today ;why there is no rain today; it is too cold, there should be some sun. We take this even to emotional level be it with people or pets. We need to get what we want; attention, a gesture, love, affection, a smile. All of that when we want, the way we want and where we want.

Many times we do not even seem to notice how these simple wants conflict with each other. I want to eat fresh vegetables, so I go to local green market (because super market is all frozen stuff) to buy fresh produce. I filled up the bag for 2-3 days, but then every day my wants were different. I wanted chicken one day, fish another day and what about that meat pasta 3rd day and on 4th a special veggie which I did not buy. On 5th day, I open the fridge to notice old vegetables, half of which I probably need to throw away as they were not fresh any more. On the other side is the story of capitalism and industry ruled by “big super stores” who apparently killed the small stores. Unfortunately, in the local green or fish market we cannot find our toothpaste or pasta or can of beer or other such stuff. A lot of us would sit and complain about these super markets along with the idea of ever rising prices. Many simply go to the market and buy which they want now. Usually they end up paying the high price of this want and end up not going to that trip on new year that they wanted all year along. The referred article above provides some detail on this behaviour.

This is one thing which has changed recently and is still changing as far as the wants are concerned. It is the time and effort that we are ready to pay for our wants. When humans realized that they wanted to have bread whole year around, they worked hard in the farms to make sure that they had good produce. They had to dig wells, create channels for water, ensure than animals do not eat the crop, work on storage units and they even tried to protect themselves from floods and drought by praying to Gods. If I wanted a new shirt, I would have to wait through the winter, work through the season and pray for a good harvest, so I could find little extra to get that shirt. But, now it is different. I see that I have cupboard full of clothes that I have worn many times in last 6-10 months, so it is time to buy some new. We want to eat all fruits all year around. We do not have the patience to wait for the season to come.

Across the globe we want to eat bananas, pineapples, mangoes or any other food that does not exist at our own place. But still we go fighting against globalization and support local produce, local employment. We want all the clothes, all the colors, all the fanciness at cheaper prices, but we do not want to support manufacturing in China or Bangladesh, we do not want to see all the chemicals. We want to travel the world, but we do not want pollution neither from petroleum nor from harmful chemicals used in battery storage. We want the best medicine individualized to the person that works without risks, but yet we want to stop animal testing. We want the government to be ideal, clean, without corruption working tirelessly to make use of our tax money, but we want to have the freedom to throw that cigarette butt on the street and fly that empty can in the air. We want police to ensure our safety, but we also want that no body touches us, scan us or ask questions. We want to buy things cheaper, but also want to receive more salaries.

This list of wants and their conflict can go on and on. With time we will create new wants and new conflicts. Couple of big ones to come are genetically engineered medicine and humanoids. The debate is already going on and the tug-of-wants will keep on going. In all those wants where are our needs? Do we know what we really need? Or have we lost that feeling at all and all we know is our wants? Apart from other things, I personally always feel the need to smile and laugh and I also need to see smiles and hear the laughter from others. I hope it remains and do not get lost in volume of wants.

Interesting inforgraphic: Ofcourse it is only a survey and may have its own flaws.