River flows continuously, almost the same way existence is moving. Difference is that river is something we can see, we can touch, we can walk with it, we can take a bath in it, we can feel its changing strength. We can see its rage when it starts from mountains and its calmness, when it comes to plains. It has done the same for ages. It takes turns as it move from place to place. It builds up connections with the land, with stones, with plants and animals. Sometimes, it change its course due to the demands of land and sometimes it makes the land change its layout for her needs. But, nevertheless, it keeps on moving. That day also it was simply flowing, as naturally as it has always done. But, there was some difference today. This day, she found an old man by it’s shore. The man had a question for the river. The question that no one had asked her before. 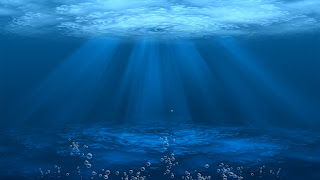 The man was no ordinary man. He had spend his life trying to find meaning of life, of relations, of complexities. He traveled across the world, had discussions with different philosophers, psychics, scientist, anthropologists and other experts. He was well respected around the world for his experience, his knowledge and wisdom. But he knew inside that after all those years, he was still as clueless as he was when he started his quest. In fact he was more confused after listening to so many different opinions. That day he thought, he might be able to get an answer to a simple question from someone who has way more experience than any living creature. This is why he came here. He asked the river,  that she made so many close relations with others on her way. She touched their lives so closely. So close that some even changed themselves to accommodate her. How can she leave all those relations behind and continue without any consideration to others? She is leaving others in pain, while she is easily moving to next journey.

River was little surprised by the question. She took a little pause before answering, No one had ever asked her this question before. After a moment of silence, she gave him the answer. She said, “I keep moving simply because this is my nature, this is what makes me what I am. If I start questioning my nature, then I will stop, get stagnant, will not be me any more and in all probability will die. I do not question my flow. But, it does not mean that I did not share anything with others on my way. When I made the connection, I made it totally. When I left the mountains, I hit stones, fell from heights. I enjoyed those moments, so much that I did not care about the fall splitting me into various droplets and vapors. When I touched the stones on my way, they felt the creases later, but I was the one who had to split in parts first. I had to cut myself into pieces to take them into me and share my insides with them. Some relations stayed little longer than others. At places, some earth wanted to share the journey. I carried all those grains with me, in my hand, in my heart with me. We shared a beautiful connection for that time. It was not easy to let it go, but this is the suchness of the earth. We had to split, we had to take different paths. I will flow with my nature, while enjoying every shared moment and also the pain to split. I will keep flowing, till I reach the place, till I find the connection, that will not just change me for a short time. This connection, this bond will melt me, dissolve me completely, so much that I won’t exist any more. That will be my stop, where I merge with another, never to separate again. Till that time, I keep on flowing. Why I do not think about questioning my flow is because thankfully I am not human. I can just live my life without making my life complicated with unnecessary questions. So, next time when you meet someone, do not waste your time thinking and asking questions, which won’t matter. But, spent that time to connect with her so deeply that you enjoy every second of togetherness, pain of separation and even the future journey till you stop to exist.” 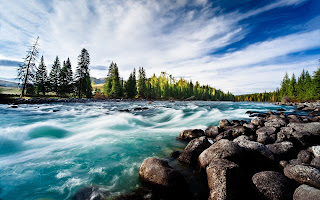 The man sat by her side for some time. He dipped his feet in her, felt her moving around his legs, felt her freshness. Slowly, he took the courage to take a dip in her. He realized how much he enjoyed the touch. He felt her touch all over his body and after sometime, he realized that she had not only refreshed his body, but she somehow managed to touch his heart and calmed it down as well. He came out with a smile on his face and he felt that it was not just him, but she also enjoyed that time with him. Only difference was that this time, he let go of the questions and allowed himself and her to connect with nothing, not even thoughts, between them. Then he said goodbye to her and kept moving on his path knowing that he has something of her and she took something of him on their paths.

The local religious leader invited Nasrudin over for dinner one night.
Nasrudin, not having eaten much that day, was famished when he got there, and eager to eat as soon as possible.
After two hours, however, the religious leader had yet to offer Nasrudin any food, and instead spoke nonstop about a variety of religious topics.
As Nasrudin grew more annoyed with each passing minute, he finally interrupted the man and said, “May I ask you something?”
“What?” the religious leader answered, eager to hear some religious question that would prompt him to continue talking.
“I was just wondering,” Nasrudin said, “did any of the people in your stories ever eat?”

When she merged with nature

Journey in the dreamworld