Falling stars, shooting stars or meteor showers; how you call them depends if you are using expressions of art, science or just a normal person. I had heard about falling stars when I was a child. Once in a while I happen to see them as well. I was told that I should make a wish when I see one; they come true. Today, I do not remember what wishes I made and if they came true or not. But, I do remember that watching those moving stars was fun while sleeping under the roof of moon and stars. However, all my life I did not know that there are dedicated days in a year when people really watch the sky to see volume of these falling from the sky. Well, that explains my lack of interest in studies and technical details. This unawareness was killed by a recent knowledge when the world was getting ready to watch the mega spectacle of 50 to 100 meteors falling per hour, known as Perseid meteor showers.

It was strange for me to hear people talking about this special event. Initially I thought, it was once in many years event. Then I learned that in this part of the globe, it is an annual activity. It felt even stranger considering that I have been living in this region for more than 5 years now. This surely increased the excitement to be part of it when I still can. Fortunately, my “watch-the-falling-star” partner found me, who was excited and interested to go out of the city. Destination was top of a hill on the nearby island away from the city lights to have a clear sky. We checked the news about the date and time for the best show, confirmed the ferry timings and fixed our appointment with stars.

We took the ferry on time and reached Preko, part of Uglian island. We spent some time at Preko Riva, with ice cream and coffee before we started our walk. With our backpacks and sleeping bags we started to walk after getting some initial directions from local people. In few minutes we were out of lights of Preko as well and we reached a main road above the city. Here we had to make a decision, which way to go; left or right? While we were doing some side by side walk, we saw a man coming on a scooter. We were happy to get our 2nd help for our directions. It was already dark and there were no lights after this road. The man was helpful to give the right directions, but it also came with a warning. He asked us, if we are sure to walk this way. When our answer came in yes, he was surprised. He then asked us to think and check again as there are wild pigs on the way. With this message the man left. He did help to answer our first question on which side to go, but he left us with even a bigger question, “to go or not to go”? We both looked at each other, with little anxiousness in our mind. Without saying a word, we smiled and took the step to our destination. 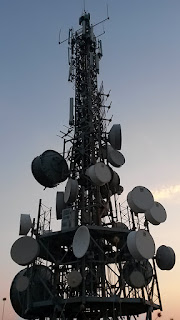 We soon left the main road and started our hike to reach the top of the hill. We have moved only a couple of hundred meters and we knew we took the right decision. City lights now looked really far and we began to see with lights of stars. In the mean time, stars had already started to fall from the sky. We stopped many times to lookup the sky. One time we had to lookup because of the sound. When we saw, it felt like this star will reach the earth and will not be too far. It all happened in a moment; sound, look-up, big star falling down, excitement, thoughts and star vanished. It was beautiful. We continued our walk while frequently having a check on the sky, like somebody is opening facebook to check how many likes have been received.

While all that fun and excitement was going on, there was another excitement happening in parallel. We both were fully aware of the warning and the potential danger around us. Both of us were watchful and alert of every sound coming from the bushes and trees. In silence, we both felt anxiety and nervousness of each other and gave support the same way. Few cars passed us, that gave us the confirmation that we were on the right track. But, it also made us think that after all the effort to walk away from the city, people, crowd and lights, we might end with a bunch of people having some feast at the top. Nevertheless, we kept on going while enjoying the stars, sounds, cars, anxiety and courage.

After more than an hour of hike, we reached our destination, St. Michael fortress. Today, it is more a radio station than any fortress. With old broken walls and roof, there is not much left of a fortress, Only room where the person who takes care of the radio station is in good shape with installed air condition. View from the top of the fortress was beautiful. After a short trip, we decided to come down a little, found a little open space and opened our sleeping bag. Stillness and 2eequietness of the place, mixed with sky full of stars was mesmerizing. It was after many years, almost around 20 years, that I was sleeping outside in open to watch the falling stars. It was relaxing to lie in the open sky and watch the stars, some of which fall. We waited to see the 50-100 meteors every hour, but after keeping our eyes open till 2 or 3 in the morning, we gave up. Somewhere between those falling stars, sleep also came and fell into our eyes. Next time we opened our eyes, it was to the morning sky, shining with its colorful hue, announcing the arrival of the Sun.

Morning was beautiful. Despite the fact that thousands of meteors burned to their death, I could not feel and smell any air pollution. On the mountain top, air was fresh, clear, fragrant and had a little chill in it. I woke up early and went up the fortress again to the see it and the world around in different light. I stood on the top of the fortress for some time, filling my lungs with fresh air and waited for the sun to rise. Finally after some wait, Sun came up to change the colors of the sky, to make the birds fly and sing and from distant one could listen to the feeble sound of human world beginning to wake up. After some time as the Sun captured all the red hue, I went down to wake up my partner to start the walk down. 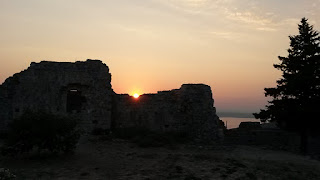 Walk down was a completely different experience. In daylight, despite the fact that wild pigs are still somewhere in that forest, we did not have any fear at all. It felt like it is our place now. My partner, who was very knowledgeable of the local area, provided me with lot of information about various plants, fishing places, farms and places around. We ate few figs and berries on the way from the trees. We reached in time at Preko Riva for breakfast, before my partner falls down with hunger. After a nice breakfast and coffee we thought to check the time for ferry. The only way to avoid waiting for couple of hours was to run to the ticket counter to catch the one in 15 min. Despite the big line at the counter, we managed to get the tickets and enter the ferry in the last minute. After 45 minutes, we were both in deep sleep and continued the journey of falling starts in our dreams in our rooms. When I woke up late in the evening, I was happy and carried a satisfying smile on my face. Smile that was backed by the beauty of falling stars, the sleep in the open sky, the beautiful walk at night and in the morning, the courage to make it to the top, freshness of the morning and the company of a beautiful person to share the experience.

I hope next time, when I happen to witness falling stars, I can continue this journey of beauty and sharing.

Mulla Nasrudin’s son, home from college, was talking to his father about the “Law of Compensation,” which he had studied. “If a person loses one eye,” he explained, “the sight in the other becomes stronger. If he loses the hearing in one ear, the hearing in the other becomes more acute. If he loses one hand, he becomes more agile with the other.” “I GUESS THAT’S RIGHT,” said Nasrudin. “I HAVE ALWAYS NOTICED THAT WHEN A MAN HAS ONE SHORT LEG THE OTHER IS LONGER.”